Natural Language Processing (NLP) tasks, such as part-of-speech tagging, chunking, named entity recognition, and text classification, have been subject to a tremendous amount of research over the last few decades. Text Classification has been the most competed NLP task in Kaggle and other similar competitions. Count based models are being phased out (are they ?) , while new deep learning models are emerging almost every week (may be every month). This project surveys a range of neural based models for text classification task. Models selected, based on CNN and RNN, are explained with code (keras with tensorflow) and block diagrams from papers. The models are evaluated using one active kaggle competition medical datasets msk-redefining-cancer-treatment. All of them will be technical overview and for details please refer paper. This post assumes reader has good background in NN and CNN. Following models are explored.

Let dive right in to it.

Yoon et al (2014) proposed CNN models in addition to pre-trained word vectors, which achieved excellent results on multiple benchmarks. The model architecture as shown in the figure below maintains multiple channels of input such as different types of pre-trained vectors or vectors that are kept static during training. Then they are convolved with different kernels/filters to create sets of features that are then max pooled. These features form a penultimate layer and are passed to a fully connected softmax layer whose output is the probability distribution over labels.

The paper presents several variants of the model:

Lets look at the keras code for the model

Kalchbrenner et al (2014) presented Dynamic Convolutional Neural Network for semantic modeling of sentences. This model handles sentences of varying length and uses dynamic k-max pooling over linear sequences. This helps the model induce a feature graph that is capable of capturing short and long range relations. K-max pooling, different from local max pooling, outputs k-max values from the necessary dimension of the previous convolutional layer. For smooth extraction of higher order features, this paper introduces Dynamic k-max pooling where the k in the k-max pooling operation is a function of the length of the input sentences.

Wide convolutions are preferred for the model instead of narrow convolutions. This is achieved in the code using appropriate zero padding.

This network model’s performance is related to its ability to capture the word and n-gram order in the sentences and to tell the relative position of the most relevant n-grams. The model also has the advantage of inducing a connected, directed acyclic graph with weighted edges and a root node as shown below.

Folding and K-max pooling layers are not readily available and have to be created using keras functional apis. 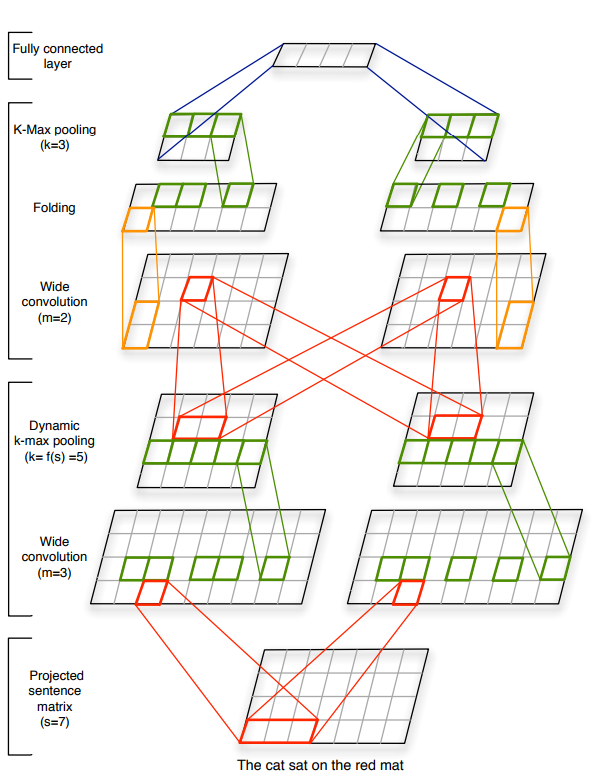 Lets look at the keras code for the model (simple right, keras rocks)

Refer code for KMaxPooling and Folding. Keras model summary and code for DCNN can be found here.

The model contains three pooling operations that halve the resolution each time resulting in three levels of 128, 256, 512 feature maps. There is an optional shortcut connection between the convolutional blocks that can be used, but since the results show no improvement in evaluation, that component was dropped in this project.

Each convolutional block is a sequence of convolutional layers, each followed by batch normalization layer and relu activation. The down sampling of the temporal resolution between the conv layers ( $K_i$ and $K_{i+1}$) in the block are subjected to multiple options:

This model is super deep, still the code is simple

Lets look at the keras code for the model.

Keras model summary and code for VDNN can be found here.

Yin et al (2016) propose MV-CNN, which combines diverse versions of pre-trained word embeddings and extract features from multi-granular phrases with variable-size convolutions. Using multiple embeddings of the same dimension from different sets of word vectors should contain more information that can be leveraged during training.

The paper describes maintaining three dimensional embedding matrices with each channel representing a different set of text embeddings. This multi-channel initialization might help unknown words across different embeddings. Frequent words can have multiple representations and rare words (partially known words) can be made up with other words. The model then has two sets of convolutional layers and dynamic k-max pooling layers followed by a fully connected layer with softmax (or logistic) as the last layer.

The paper describes two tricks for model enhancement. One is called mutual learning, which is implemented in this project. The same vocabulary is maintained across the channels and they help each other tune parameters while training. The other trick is to enhance the embeddings with pretraining just like a skip-gram model or autoencoder using noise-contrastive estimation. 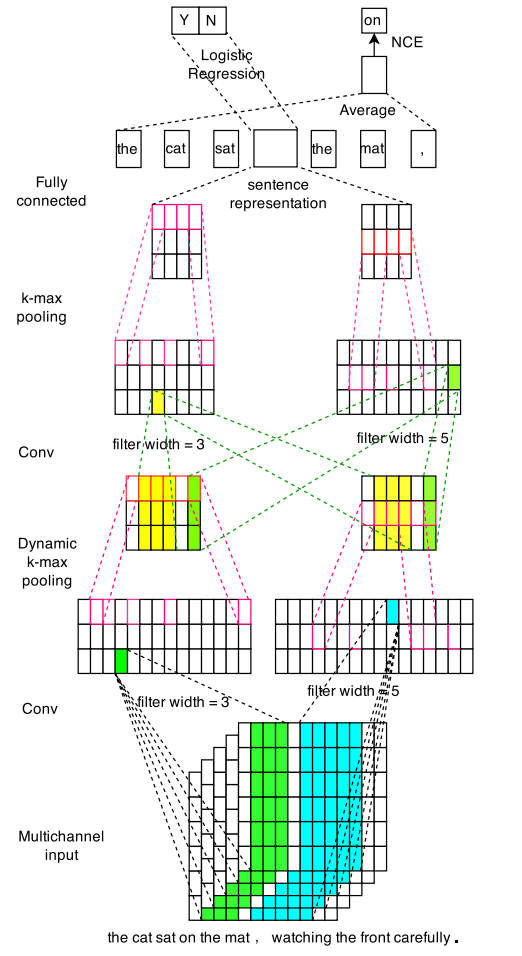 Lets look at the keras code for the model.

Keras model summary and complete code for MVCNN can be found here.

Ye Zhang et al (2016) proposed MG(NC)-CNN and captures multiple features from multiple sets of embeddings that are concatenated at the penultimate layer. MG(NC)-CNN is very similar to MV-CNN but addresses some drawbacks, such as model complexity and requirements for the dimension of embeddings to be the same.

MG-CNN uses off the shelf embeddings and treats them as distinct groups for performing convolutions following up with max-pooling layer. Because of its simplicity, the model requires training time in the order of hours. MGNC-CNN differs in the regularization strategy. It imposes grouped regularization constraints, independently regularizing the sub-components from each separate group (embeddings). Intuitively, this captures discriminative properties of the text by penalizing weight estimates for features derived from less discriminative embeddings. Different sets of trained embeddings and l2-norm regularizer will be used in the implementation. 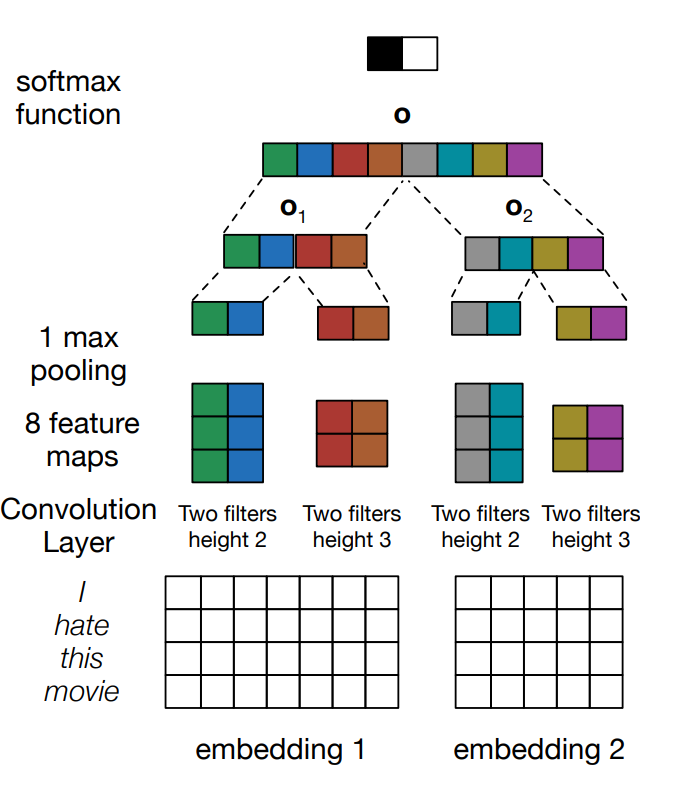 Lets look at the keras code

Keras model summary and code for MGCNN can be found here.

Ye Zhang et al presents RA-CNN model that jointly exploits labels on documents and their constituent sentences. The model tries to estimate the probability that a given sentence is rationales and then scale the contribution of each sentence to aggregate a document representation in proportion to the estimates. Rationales are sentences that directly support document classification.

RA-CNN model is same as Doc-CNN but document vector is created as weighted sum of its constituent sentence. There are 2 stages in training this architecture, sentence level training and document level training.

For the document level training, the document vector is estimated using the weighted sum of the constituent sentence vectors. The weights are set to the estimated probabilities that corresponding sentences are rationales in the most likely direction. The probabilities considered for the weights are maximum of 2 classes positive and negative rationale (neutral class is omitted). The intuition is that sentences likely to be rationales will have greater influence on the resultant document vector. The final document vector is used to perform classification on the document labels. When performing document level training, we freeze the sentence weights $W_{sen}$ and initialize the embeddings and other conv layer parameters tuned during sentence level training. 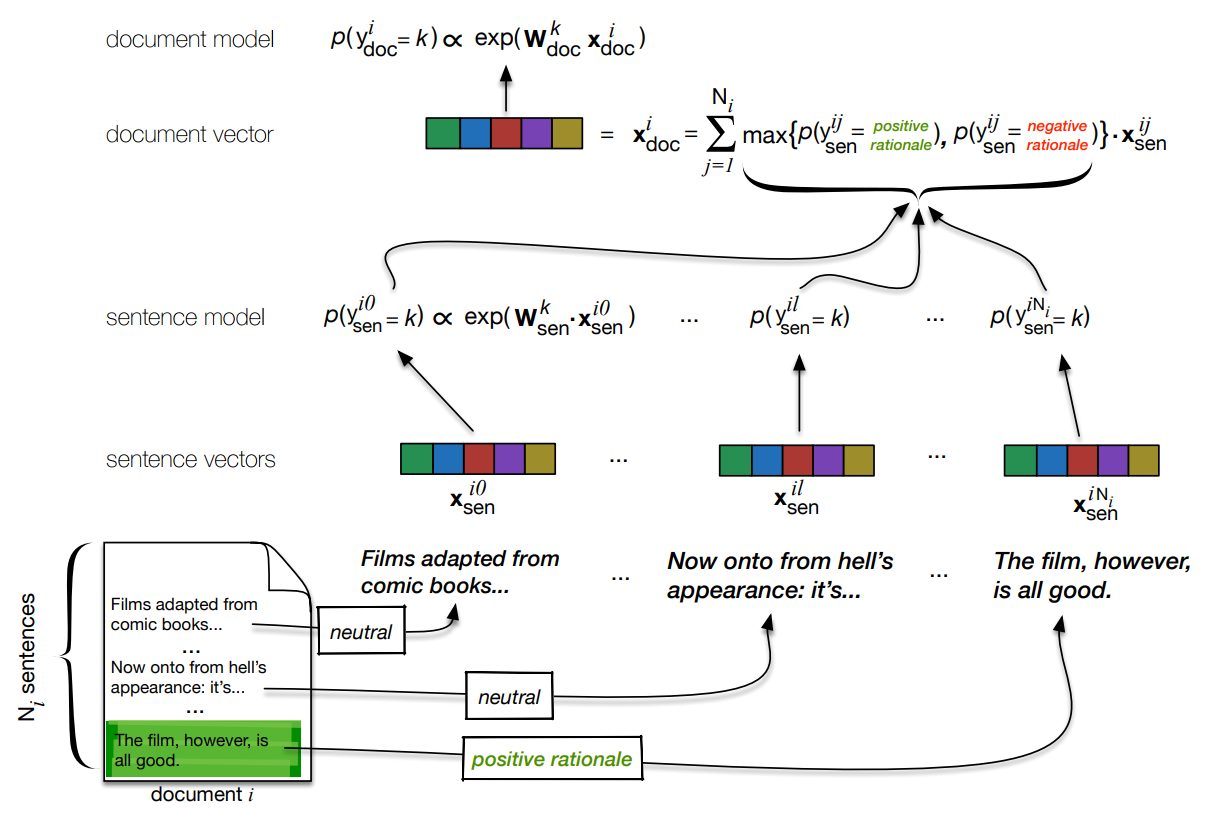 Lets look at the keras code for RA-CNN

Keras model summary and complete code can be found here

Other Models and Study on CNN methods

Johnson et al (2015 and 2016) paper1, paper2, paper3 papers propose models based on CNN with words and characters under wide and narrow convolutions. These papers use word vectors as one hot encoding in the vocabulary. I tried to run the code but it was not easy.

Ye Zhang et al (2016) derives practical advice from extensive empirical results for getting the most out of CNN models in text classification task. Using right hyper parameters might look like black magic, but this paper gives sensible practical tips for choosing them.

Le et al (2017) studied the importance of depth in convolutional models for text classification and shows that simple shallow and wide networks outperform deep models with text represented as characters.